Forestry and fishing named as most most dangerous jobs, new data shows

Forestry and fishing named as most most dangerous jobs, new data shows by Andrew Brown.  Available from <http://www.smh.com.au/act-news/forestry-and-fishing-named-as-most-most-dangerous-jobs-new-data-shows-20170526-gwe47l> [May 27, 2017] Photo: Karleen Minney

Employees working in agriculture, forestry and fishing industries are making a living in the most dangerous workplaces in the country, new data shows.

Analysis of data from Safe Work Australia by comparison site finder.com.au has revealed 52 agriculture, forestry or fishing workers died on the job in 2015.

Those working in transport, postal and warehousing weren't far behind, with 40 workplace deaths, followed by construction workers with 33 fatalities at work.

While health care and social assistance had the fewest recorded deaths out of the 10 most dangerous industries, it did record the most number of serious workplace injuries, with more than 17,000 recorded during 2015.

It was followed by manufacturing with just under 14,000 injuries, and about 12,500 injuries for construction workers.

Despite being the industry with the most workplace fatalities, agriculture, fishing and forestry had the third least amount of injuries out of the top, with 3410.

The safest industry was the financial sector, with no deaths recorded in 2015 and 666 compensation claims.

While figures from Safe Work Australia show the ACT has the lowest workplace fatality rate out of any other state or territory, a report released earlier this year said the incident rate for long-term injury claims in the ACT was rising while the national average falls.

CFMEU ACT secretary Dean Hall said the construction industry in the ACT was overly represented when it came to employees sustaining injuries at work. 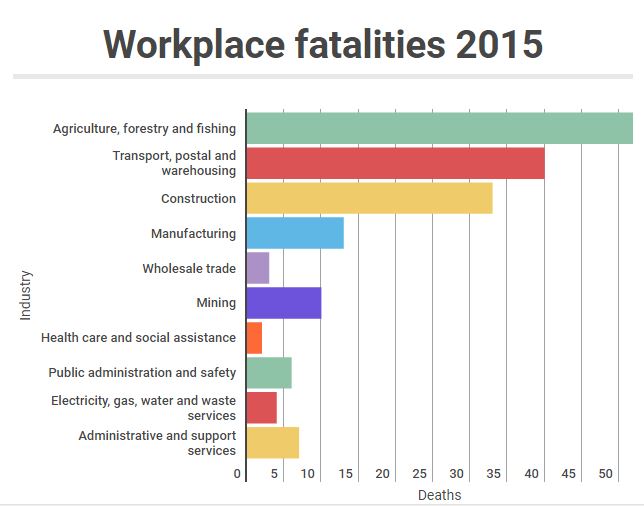 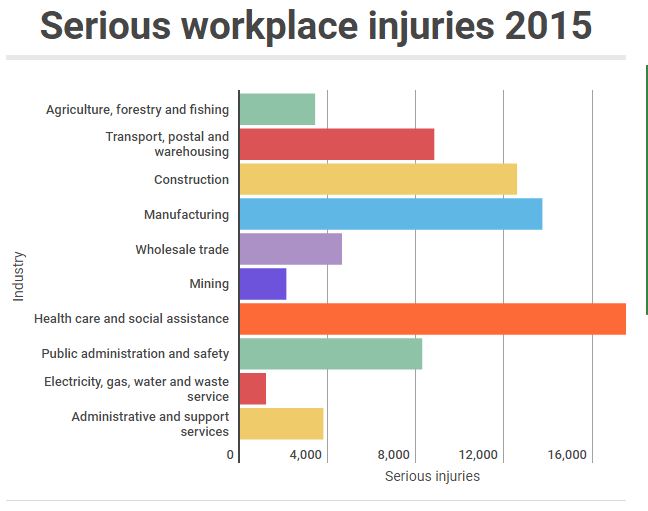 "The ACT has the highest rate for any jurisdiction for worker injuries," he said.

"We have a culture of disregard for the safety of builders in Canberra."

The new analysis comes four years after the 'Getting Home Safely' review into construction industry deaths, which focused on lowering injury rates.

Mr Hall said the increase of casual work in the industry was also seeing a rise in the number of serious injuries on building sites across the ACT.

"How can a worker ever come forward and speak out in their workplace if they are a casual and don't have secure work?" he said.

"A worker will always be vulnerable to bad practice because they're too scared to come forward."

While industries with high fatality and injury rates such as mining and fishing were rare in the ACT, Worksafe ACT commissioner Greg Jones said other sectors such as retail and hospitality were prominent in the nation's capital when it came to serious injuries on the job.

"Obviously retail is a big sector and a big employer in the ACT, and obviously with the size of the public service, the public administration and safety industry is also up there," he said.

"Worker safety is a combined responsibility for both government and industry as well as the workers themselves and the unions that represent them."

Forestry and fishing named as most most dangerous jobs, new data shows by Andrew Brown.  Available from <http://www.smh.com.au/act-news/forestry-and-fishing-named-as-most-most-dangerous-jobs-new-data-shows-20170526-gwe47l> [May 27, 2017] Photo: Karleen Minney

View all posts by: QuickIMS